So Wrong it’s Right: The Play That Goes Wrong brings chaos to the Duchess Theatre

Anyone who has witnessed, or performed in, badly done amateur dramatics will instantly recognise all the essential elements in The Play That Goes Wrong.  It is the definitive guide on how to not act, direct, write and stage-manage, and it’s a winning formula. The worse the evening gets, the better it is and if its an evening of appalling theatre you are after, this play doesn’t fail to disappoint.

The scene opens with a ‘Director’ introducing his debut production for the Cornley Polytechnic Drama Society, ‘Murder at Haversham manor’, promising a new high for the society and a big budget production, but it turns out that this drama group take the old adage ‘The show must go on’ to the ultimate extreme, giving us not so much a ‘Whodunnit’ as a ‘Whydidtheydoit?’  Whether battling against a dysfunctional set, unconscious actors, or a disappearing dog, like all great classic comedy, the real laughs come from watching the hapless theatre company trying to rise above disaster, whether dressing a stage hand up to stand in for the female lead half-way through, bravely downing glass after glass of white spirit after a mix up with the whiskey, or the desperation of the actor playing a dead body who must somehow find a way to leave the stage unaided in the full glare of the lights.

There are too many brilliant moments to mention, but the highlights for us must be the elegant precision with which the lead actress is knocked out by a door; the ingenious way in which two actors find themselves holding up the set whilst still managing to take a phone call (in the days before hands-free), and the infamous ‘script loop’, in which the actors get caught in a potentially endless loop of repetition (involving copious amounts of white spirit again) before the culprit finally remembers the line to free himself, to rapturous applause.

Portraying incompetence on this scale is a highly skilled business, and Mischief Theatre, led by Henry Lewis and Jonathan Sayer, have been dedicating themselves to this cause since 2008, and it shows.  The ingenuity with which they reveal the ability of human beings to fail spectacularly is seemingly endless, and it is the attention to detail which delights, whether the actor whose hair is only grey from the front, or the growing confidence of the juvenile lead getting applause for recovering from some terrible mistake. Add some perfect comic timing and a genuine understanding of the human foibles which lead apparently sane people to humiliate themselves in front of an audience, and we have a theatre group worth watching.  It’s impossible to pick anyone out, so let’s just say we wish Greg Tannahill, Henry Shields, Charlie Russell, Dave Hearn, Nancy Wallinger and Rob Falconer many more years of highly skilled and toe-curling antics. 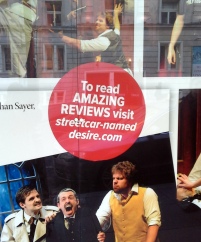 1 Response to So Wrong it’s Right: The Play That Goes Wrong brings chaos to the Duchess Theatre

This site uses Akismet to reduce spam. Learn how your comment data is processed.